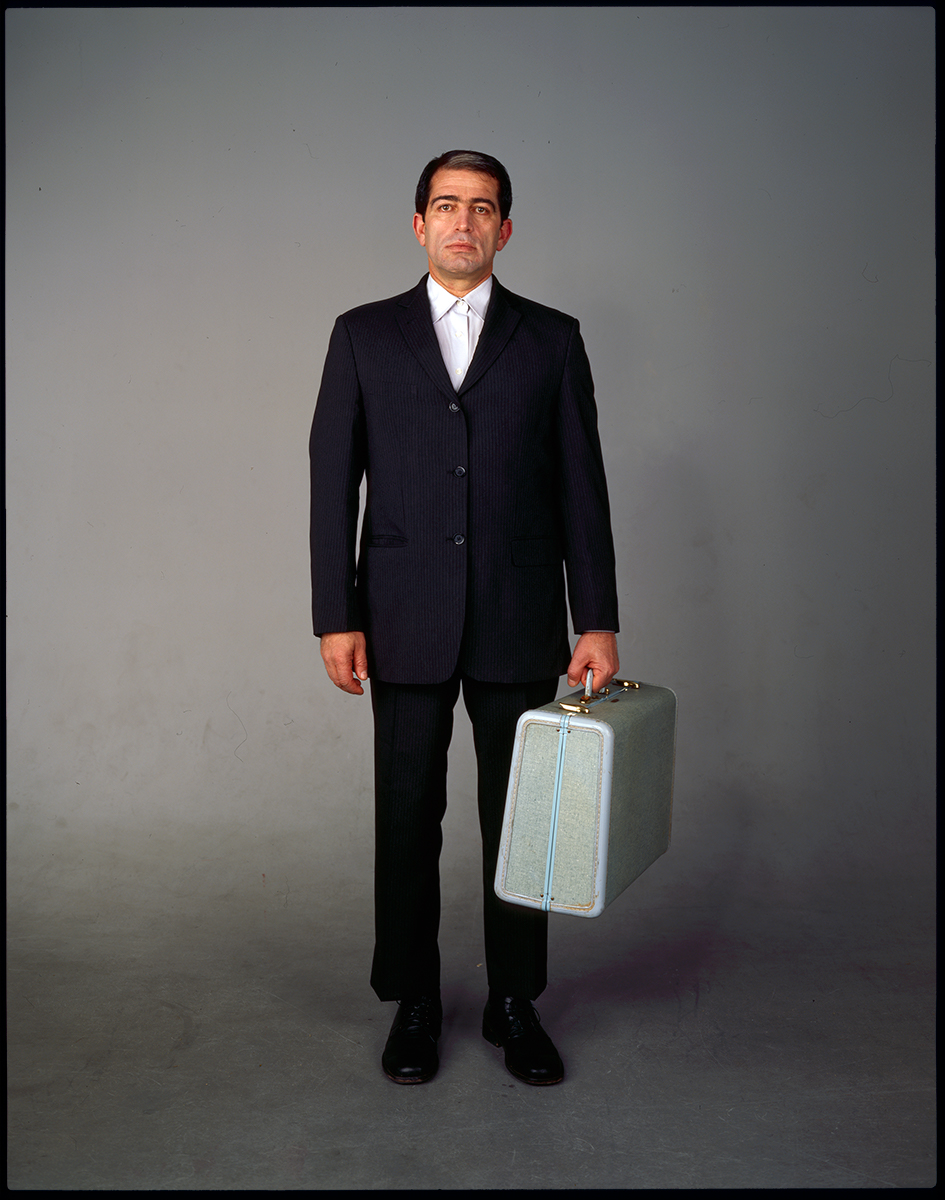 Semiotics of a Migrant Man Located in Germany

Shahram Entekhabi, who has been living in Germany since 1983. In 2004, with the video work “i?”, he began a series about the conceptual and visual figure of the migrant. Structurally, “i?” followed the pattern of an older film, which Entekhabi had associated with his perspective as a migrant. In his video work “3 seconds” (2004), he then established the visual tool – the figure of the man described at the beginning – that was to develop into his alter ego in subsequent works, albeit manifest through different media. The video projection works “Kelvin Smith library” and “Walkout” (both 2005) follow the media vocabulary of painting and a projected background, as in “Flower”, although the ultimate relation between background and figure is differently formulated in each work. In the videos “Rockefeller Boulevard”, “Road Movie” and “Gold” (all 2005), the artist accepts his alter ego as a cinematic figure. In each case, he strides rapidly through the film set, which may be the grounds of a factory, a road or even a desert. In the performance-videos “Attenzione” and “Caution / Celevland” (both 2005), the guest-worker alter ego becomes active and takes steps to create or delimit space using the red and white tape that is familiar to us from cordoned-off construction sites. His actions develop a melancholy note in “Alcazar”, dating from 2005.

In all these works, the figure retains his suitcase as an “accessory”, whereby the rose disappears. The suitcase is a symbol of travel, of the transfer between cultures, but it should also be seen as a container for personal objects; in it, these are able to move across times, spaces and cultures. In a similar way to Charlie Chaplin’s cane, or to the umbrella in Jacques Tati’s films, the suitcase in Entekhabi’s works is an object which – as a result of its design – may be attributed to a bygone era. In this sense, I interpret the suitcase as a characterising symbol of the figure of the migrant. Entekhabi’s alter ego adopts the role of a social outsider, whose appearance and actions mean that he does not fit into the context of pragmatic, everyday events. In this respect, too, Entekhabi’s figure may be compared with the alter egos of Chaplin and Tati, who stand out visually as a consequence of their old-fashioned clothing and accessories, emphasising their difference to the dominant social environment. The Duden defines the expression alter ego as “the other, the second ego” but also as a “very close friend”. In film and literature, the concept is often used for a second personality adopted by an individual; one that usually displays different character traits to the actual, the “real ego”. The alter ego of the guest-worker offers Entekhabi the possibility to relate changes in the world of work to his own experiences as a migrant in Germany.
But it is no longer possible to restrict the development of migration to a few ethnic groups, and the social picture in Germany has become more complex and varied, together with the accompanying prejudices and clichéd notions concerning individual cultures. Shahram Entekhabi reflects on this by differentiating his figure of the migrant far more, abandoning his alter ego. In the most recent video works “Miguel”, “Mehmet” and “Mladen”, or also in “Islamic Star” (all 2005), the artist slips into a range of different male roles and ethnic backgrounds; usually within an urban environment. The first names in the titles already point to different origins, which Entekhabi expounds with his now constantly changing outfit and behaviour.

The Migrant (my "Super Heros") appeared at the following exhibitions:

The Migrant (my "Super Heros") appeared at the following publications: