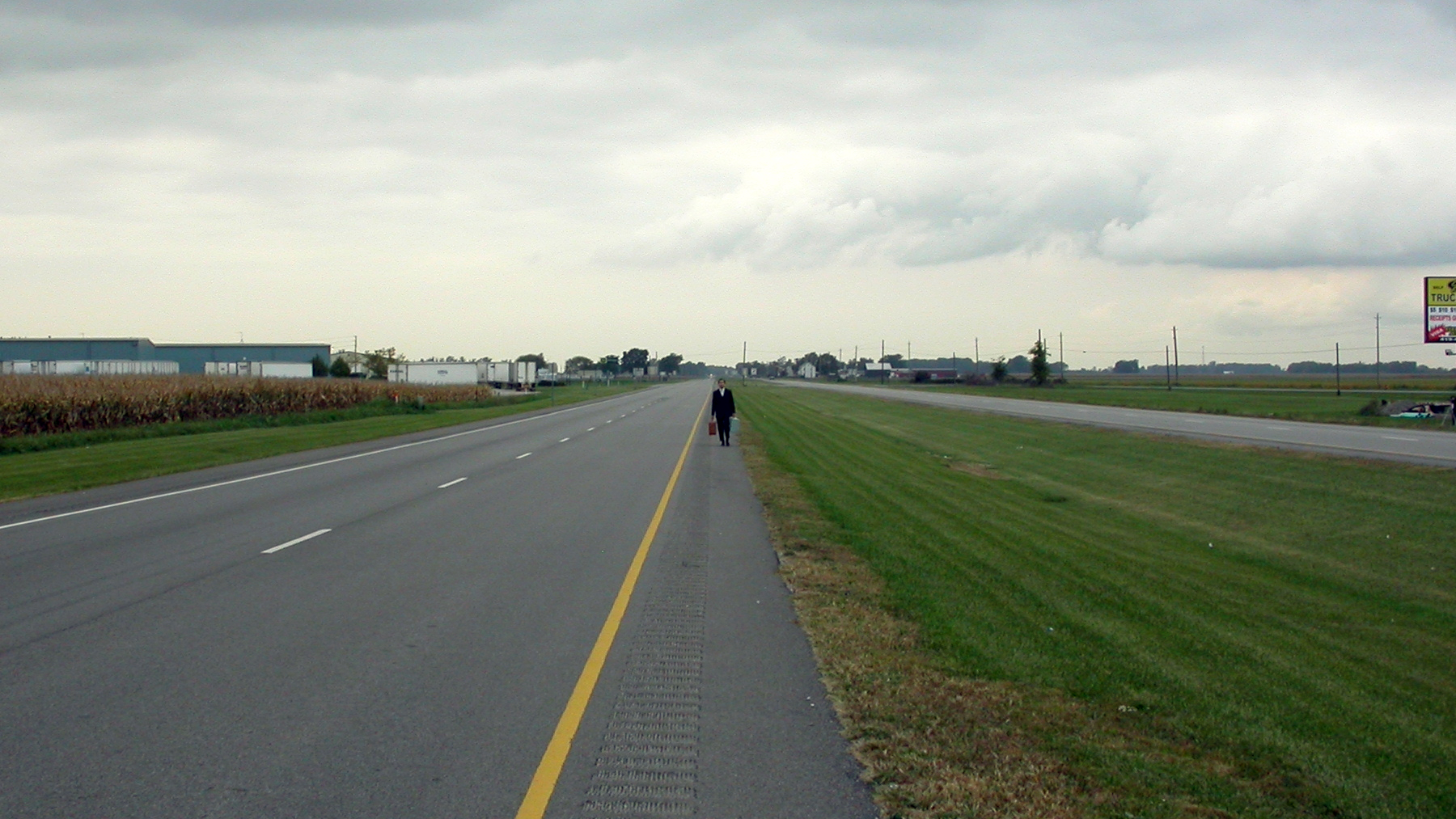 Depending on when one enters the gallery space, the film looks like a still photograph, evoking a traditional landscape painting, or like a film. The one-shot film Road Movie is 17 minutes long. On a four-lane highway, dangerously close to the cars, on the edge of a green median stretch of hollow road, a man walks. The man in the somewhat shabby, slightly out-of-style but very proper suit and black shoes just walks away, his back turned to us. He carries two old cardboard suitcases. He walks fast and disappears into the distance, into nothingness. He never looks up. Cars keep rushing by. Then for at least eight minutes nothing happens but more cars.

Just when the viewer might either get a bit annoyed by the narrative silence, or forget about the narrative potential proposed at thebeginning and just look at a photograph of painting, something happens again. From very small to recognizable, the man comes back, as a relief of the tension emptiness creates. But to process this as a narrative one begins to ask questions that explain the two otherwise disconnected events of his departure and his return. Was he sent back at the other end, refused entry or chased away by angry Americans-only types, or did he return because America has nothing to offer? Or did he return in belated acknowledgement of the viewer? At the end, he comes close enough to looks at us, but he doesn’t ever look us in the eyes, because he is too busy walking on. That’s all.

In conceiving this film, we speculated that for the viewer something else happens. First, when you see him walk away, it is simply an event that doesn’t concern you. He seems a bit out of place under the ominous clouds, but since we only see him from the back, we can’t quite tell. Formally, it is a narrative "in the third person," about someone else. You look on, the way you ordinarily look, with indifference. An unreflective look, taking in only what interests us, remaining on the surface of everything else: this is the look the first half of the film solicits. When he has disappeared and the image remains empty of his presence, the memory of his passing by seems like a little piece of lint on a black shoulder, swatted away in an unconscious gesture of propriety. This man wanted to come and stay among "us" – fine. We don’t give it a thought. The empty road is the image of normality. His disappearance depletes whatever narrative expectations we might have had, so that the film becomes a photograph again.

But that image, when nothing happens, becomes boring and, by means of that boredom, it does begin to intrigue us. What’s the point of this emptiness? Why would this be what we want: because we know it so well, because it is what we find normal, although the lack of meaning begins to glare at us as soon as we start to think? This is the turning point, long before he turns around and walks back. The turning point of the act of viewing is the moment boredom becomes a trigger of asking ourselves questions about the point of our existence, not that of the anonymous walker. Boredom as the alternative of suspense, identification, or sentimental appeal.

But boredom is also triggered by the conceptual and sensory gap between film and painting. One would not be bored looking at a landscape painting, however long one feels like it. Knowing this is a film, instead, mobilizes the spectacle-induced expectation of action. This is how boredom is anti-narrative; it is what makes narrative intolerable. When we get bored, we shut ourselves off, close the book, or leave the film. Between the departure of the man and his return, the expected action remains like a glaring gap. For, strictly nothing happens. That nothing kills narrative.

In the middle of this mood change, in the far distance where the vanishing point has swallowed him, a tiny figure appears. It’s the man, reappearing. Strangely, now the viewer looks actively forward to his approach. He is facing us and we are getting ready for an encounter. The previous emptiness that had triggered a simmering of melancholy is going to be relieved. Even the sky has cleared up a little bit. He comes closer and we look at the rhythm of his equally fast, although slightly more tired steps. The visual discourse has changed profoundly. From a narrative in the third person, we are now set up as the "first person," having an active experience, addressing with our eyes the other who is the ""second person," and as a result, our affective relationship to the figure and his return may change.

When, finally, he comes to us, however, he just walks out of the image. Not for a moment can we look him in the eyes, can the encounter that we desire so, and that would turn this non-story into a narrative, take place. Is it that, after having been rejected once too often, he cannot be bothered with our needs to feel good about ourselves? He turns the table on us, responding to our previous indifference with his own. But these speculations stem from a narrative desire to fabricate a story. His pale face lets us try many possible readings: exhaustion, perhaps anger, but really, nothing is readable in it. No imploring, no begging for mercy, no demand for sympathy and contact. We did not see him, now he does not see us. It’s too late. Too late for contact, to late for a story.

The man’s disappearance into the vanishing point is a literalized metaphor of the image’s deceptive superficiality, disguised as depth. When after the man’s disappearance, nothing else happens but cars rushing by, the frustration engages video on its own terms. Only when we have shed the habit of seeking to reach beyond visibility will the visibility that video offers strike home in full force. The boredom of the film’s length is in turn a metaphor for the temporality of the loop.

The ten or so minutes that the man is invisible, that he has disappeared into that most classical of Western visual structures, the vanishing point, stand for everything we cannot know – about other people, other lives, other desires and initiatives. The limit of knowledge is, at the same time, the trigger of a potential encounter. The other three films we have made so far speculate on what the man can possible have undertaken during those allegorical ten minutes. we see what might have happened during the primary gap that constitutes this film’s anti-narrative void: that time during which he was, so to speak, inside the vanishing point. These tiny events, in turn, also constitute interruptions, gaps, disappointments.

The camera participates in the production of this failed narrative in specific ways, not assimilatable to narrative voice. The camera stays in the same position: stable, confident that the migrant passing by will willingly submit his story without much effort from the side of the camera. However, the resistance of the other to facile narrativization (the migrant walks on without stopping for the camera) shakes the self-assurance of the eye of the camera (manifest in its immobility).