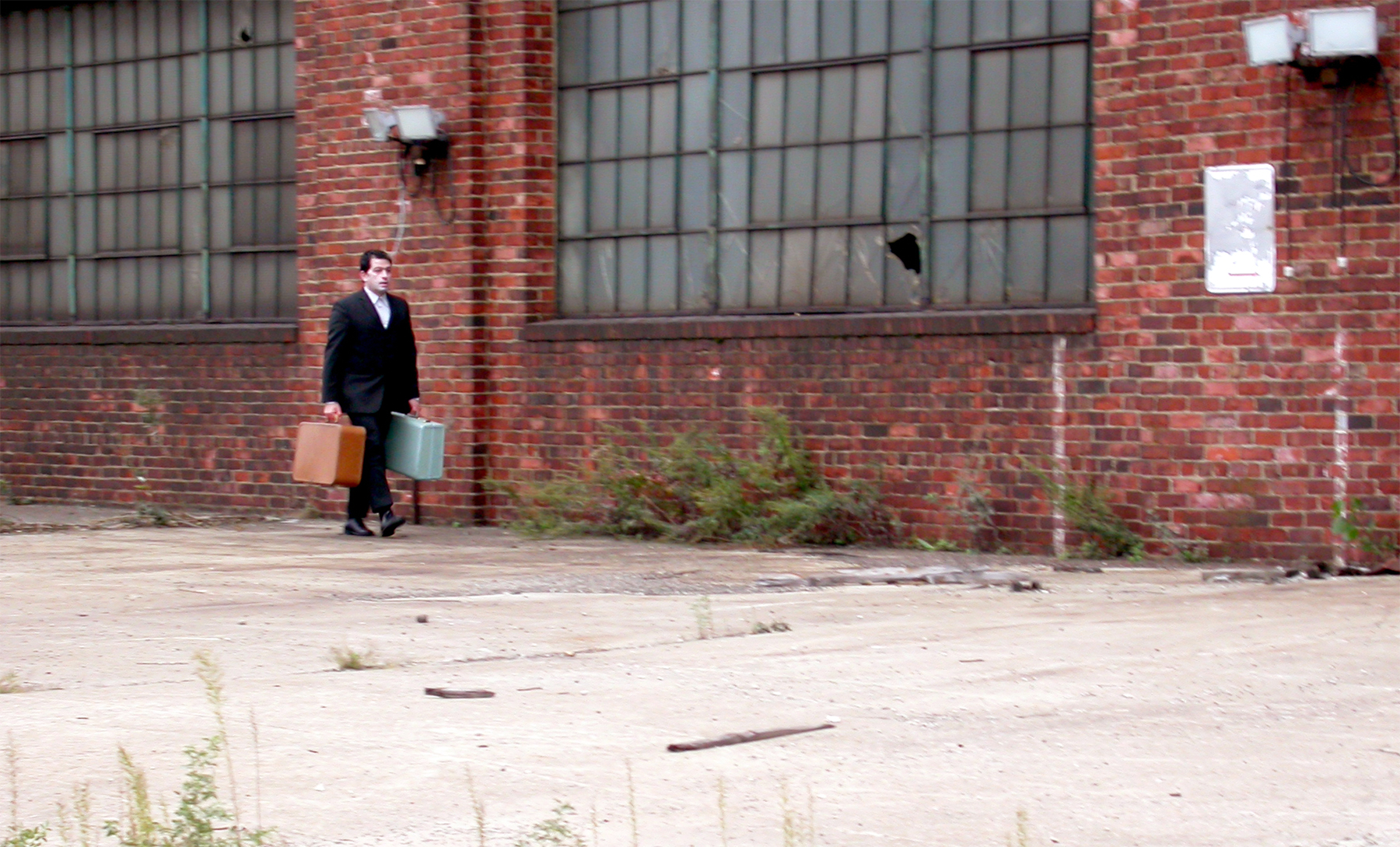 Rockefeller Boulevard
Yet another act can have happened in the gap when the figure had disappeared in Road movie, but do not expect it to be related to that of Caution. And here, too, the camera interacts with the figure as well as with a dual tradition in Western art. This time, it is cinematic comedy in the allusions to Charley Chaplin’s Modern Times, and painting, in the composition of the images.

The wind blows fiercely; the legs of his pants flip-flop, showing the thinness of the fabric. He must be cold, and the hot climate of his home emerges by contrast. Just as the media of photography and video, here, are set off against each other. If you need a story, it would be this account of what happened during the time he was gone, in Road Movie, in the vanishing point. With the two suitcases that mark his recent arrival, he explores different sites on a large, impenetrable space. Urban, but without people; desolate, without nature. He might be looking for work.

The industrial area of a city that is long past its economic flourish. He walks past huge oil containers, that ironic icon of the Mid-West’s appropriation of the middle-East’s natural riches.  Between him and the containers stands an insurmountable fence. Then, looking around, sitting at a picnic table, peeping into broken windows, walking along an unreadable low building, he seems lost. In the distance, a chimney still vomits clouds, unreachably far-away symptoms of possibility; a reminder of what he came to search.

But, embodying retroversion, he is irremediably late. Industry is over. The buildings to which he came, on which he had set his hopes for a better life, are ruins of history. By the time he has understood that the only way to survive was to follow the oil from his country to its destination, the oil had burned up. Modern times have become an object of nostalgia, and the Migrant is no longer wanted. In the end, we imagine, he returns to the invisible point from whence he came, on this side of the camera.

In "Rockefeller Boulevard" the camera decides to follow the man, give him full attention, so as not to miss a thing from his walk and actions. The voyeuristic eye of the camera is stalking the man, in the hope perhaps that he will finally respond, turn around and offer us his gaze, which would be a portal to his inner world and even the key to his story. But just as the Western world in which the migrant sought answers does not welcome him or offer him any solutions (the doors of industry seem to be closed), he, too, stubbornly refuses to offer any aperture and to submit to our need for a coherent narrative of otherness. This, of course, does not stop the camera (and the viewers) from making stories about him. But the man’s invisible gaze throughout the films reminds us that these stories are more ours than his.

But this story is as out of joint as everything else in this series. Here, this out-of-jointness is given shape by video’s struggle with the gap as such. The video is constantly interrupted. The bits of moving image are powerless against the almost violent way the gap takes over. Since the migrant never reaches any destination, the obsoleteness of the industrial building loses its relevance. For historical time always holds the promise of a return of the swing, a utopian possibility that things will get better. The halting rhythm of this video holds such false promises at arm’s length.

What happens in the gaps – the primary one, within Road Movie, the ones within Rockefeller Boulevard, and the ones between the films, is further de-narrativized by the incongruity of moods. Alcazar is a deeply melancholic film, on which more shortly. Caution a mildly comical one. It fits the mood of Rockefeller Boulevard that the audio-visual stagnation is set in grey tones, only sparsely interrupted by sap green and ochre, with a grey-blue sky. These colours disappear along with the readable image when the interruptions occur. The colours of painting cannot hold up against the reproducible images that have taken over the public domain. In this sense, this video is also a meditation on the monopoly of electronic media, the accounts to be settled with the arts of the past, and the new art that can emerge when all else fails. This, too, is a commentary on the culture of migrancy.

What I submit for discussion here, in this context, is what I see as the wavering between narrative temptation and the ultimate failure of narrative, both phenomena leading to the question of performativity. If on the one hand, the narratorial voice in its cinematic form of camera and editing, is countered, if its power is taken over by performer and unreflecting bystanders, and on the other, the coherence of the series of events in sequences with some logical and chronological solidity is destroyed by gaps of all kinds, do we therefore have to say that narrative is no longer at issue in these films?

Personally, I don’t think so. I am convinced that the impulse, or desire, for narrative, is so strong that precisely those gaps that destroy the potential story, also generate the possibility of story. Without falling back on phenomenological accounts of gaps, such as Wolfgang Iser’s "leerstelle," I would like to hear your view of what those gaps do there, in the larger part of Road Movie, between the films, or acts, as well as within Rockefeller Boulevard. Without being characters or events, the gaps are something, do something. And when beings and doings get together, classical narratology holds that story begins.

Rockerfeller Boulevard appeared at the following exhibitions, among others:
2009: How Many Angels Can Dance On the Head of a Pin? curated by Christopher Marinos. “Heaven”, 2nd Athens Biennal, Greece
2009: Going the Distance: Video Works in Migratory Aesthetics., Tampere Art Museum, Tampere, Finland