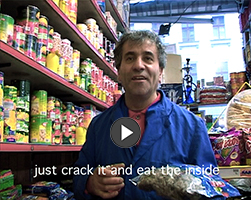 Food, Form, and Visibility (Glub)
GLUB (Hearts) is not an object of analysis but an instantiation of that activity. It became the central element of a video installation that I would like to briefly describe.[1] The idea was Shahram Entekhabi’s. During a vacation to Turkey, he realized that there might be a connection between two seemingly unconnected phenomena. The one, pertaining to the present, is that the art world in Berlin – always a slightly stiff, bourgeois city – has become much more lively during the last decade, while most people inhabiting and animating the Berlin art world are foreigners. The second, emerging from his “constellation of memories,” is that the streets in some neighborhoods in the city are more “dirty,” which makes them more likeable, even aesthetically pleasing.

It was in Turkey that Entekhabi recognized the middle-eastern habit of eating seeds – sunflower, pumpkin, and other kinds of seeds, on the street. Seeds – the eating of them, the shells, the shops and stalls, the people cracking the shells and spitting them out: you see it and you don’t, hidden as it is in ordinariness. It is a phenomenon that embodies the invisibility that comes with both the hyper-visibility of pervasive presence, and the formlessness of what is situated between countability and mass. Utterly material, seeds are countable items but their countability does not matter. Instead, what characterizes seeds or glub is their massive presence. This cultural habit determines the way the street looks, not only because the shells are dropped, but also because eating is a communal activity, which makes the interaction between people look different – less indifferent. Entekhabi speculated that it is this aspect, a “symptom” of migration that only becomes visible once you notice it, that has made Berlin so much more lively, both as an urban place and, indirectly, as an art world. In terms of my attempt to articulate an aesthetics of the everyday, the Berlin art world and glub on the streets become each other’s metaphor. As soon as he mentioned this to me, we had a project. Both of us began to associate on the idea of seeds, and to collect visual memories.

Glub, the Arabic word for hearts, is used for these edible roasted and salted seeds, a low-cost snack. Beginning with the many meanings of the seeds – traditionally eaten in many non-European societies but mostly associated with the Arabic world – we took this phenomenon as a point of departure for a stroll through the urban center. From there, the film explores the many meanings and connotations of seeds, and the implementation of “migratory aesthetics” in the Berlin urban landscape and attendant art scene. Inhabiting the world of seeds, enveloped by the smell of seeds being roasted, the inhabitant of the contemporary city is imperceptibly encouraged to be more communicative, to shed haste, and to mitigate the hitherto strict separation of home and the outside world.

Immigrant neighborhoods have more seed shells on the streets than the more self-enclosed, bourgeois neighborhoods. As a result, they attract more birds, particularly pigeons. Feeding the pigeons is a widespread tourist activity. Along these lines, seeds connect long-term displacement through migration with short-term outings of tourism. Birds transport seeds, and now people do, transporting a cultural habit from elsewhere to Western Europe. While the art world partly shifted from the Western neighborhoods to the former East Berlin Bezirke, Kreuzberg is the most noticeable area enlivened by immigrants and their restaurants, and it has, indeed, become fashionable, or “hot.”
Both galleries and seed shops have established themselves in this part of Berlin. Like East Berlin after the Wende, seeds contain the potential to grow, to flourish, toevolve, change and reproduce. Both in the bodily postures that come with the eating of seeds, and in the connotations attached to seeds, there is a slight gender aspect to this habit as well. The concept of seed has perhaps different connotations for men than for women, a difference that comes from a misconception of seed in human reproduction. But that seeds remind people of their own potential to grow and multiply is obvious.

Seed is also food. Eaten between meals, almost permanently, it is a form of non-food. This function of seed as unofficial food connects seed to invisibility and formlessness, but its constant consumption, which produces cracking sounds, smells of roasting, and waste that changes the feel of the street and the sound of walking, makes it at the same time hyper-visible. Seeds, inevitably connoting the idea of migration, are less related to religion than to unemployment in the homelands, which, granting little money and much time, both explains and justifies migration. As one immigrant from Tunisia, Tarek Mehdi, explains in the film:
you know our people
have little work, so they have lots of spare time
so they buy glub, eat it, to pass
the time ... it becomes like a tradition
people eat it with the family spend the evening
with the whole family sometimes
it's very nice

Together with the acknowledgment that this eating is something like an “invented tradition,” this statement draws gratification from a situation of unemployment and boredom. There is no need to idealize the situation this man describes, or to deny that this situation is rooted in the colonialism behind postcoloniality, in order to still see the cultural resilience expressed in these few words. In addition to clearly enjoying glub eating, the speaker also draws social value from the bonding that results.
But the link between seeds and religion is not entirely absent either – which is important in view of the cultural status of religion, its function in group-life, particularly in Arabic culture. While not subject to food laws, glub is related to the intricacies of pleasure, wealth, and the obligations of charity. In a section significantly titled “Ibn Sudun’s Sweet Nothings” of his study of food in classical Arabic literature, Geert Jan van Gelder quotes a mock doxology from medieval literature, where God is praised for the creation of the particular economy of glub:

He made sellers subservient to swallowers, those who sit in their shops and those who are ambulant. He made the kernels of pistachio nuts, having been cracked, whole.

Here, as in other cases, Van Gelder mentions that the relationship between glub and its users is both metaphorical – the sellers as well as the swallowers thrive and grow like seeds – and metonymical – the economy is sustained.[4] And, to make the analogy between this classical tradition and the Berlin art world even more specific, Van Gelder illustrates how in Arabic literature, eating and writing, eating and describing, in other words, eating and cultural production are each other’s metaphor.

With these and many other associations in mind, then, we took the video camera and started to explore Berlin, especially Kreuzberg and especially the art world. The crossing of seed eating and art, two hitherto unconnected domains, yielded a great number of unexpected connections. The formlessness of the large quantities of seeds, for example, inspired sometimes quite beautiful forms, sometimes to the need to focus on the faces, and the mouths of the people eating them – or, for that matter, a conversation about the eating habit. As the film progressed, we became aware of the close connection between the invisibility as well as hyper-visibility of seeds, and what Bataille theorized – but refused to define! – as formlessness, with its critical thrust.

In Yve-Alain Bois and Rosalind Krauss’s rendering, Bataille’s interest in formlessness stems neither from “form” nor from “content” but from “the operation that displaces both of these terms.” According to their interpretation, Bataille means with operation, “neither a theme, nor a substance, nor a concept”, three possibilities we will therefore resist to attribute to the aspect of the city’s “look.” Bataille nevertheless launches the word informe with an instructive qualification: “It is not only an adjective having a given meaning, but a term that serves to bring things down (déclasser) in the world.” And Bois and Krauss continue:

It is not so much a stable motif, to which we can refer, a symbolizable theme, a given quality, as it is a term allowing one to operate a declassification, in the double sense of lowering and of taxonomic disorder. Nothing in and of itself, the formless has only an operational existence; it is a performative […].

This rendering of informe, might as well be a description of glub: as neither food nor image but as image-making performance.
If we now bring together the three elements of the aesthetic of seed eating – reciprocal recognition, a constellation of visual memories underlying our visual habitus, and this militant performative use of formlessness – we can begin to see what kind of aesthetic we are looking at, or, more suitably, performing. All this time, mind you, we are talking about an eating habit, about a tiny snack that is as addictive as any, that produces thirst, communication, and waste. Nothing special, nothing spectacular, and, most importantly, nothing that gives rise to ethnic restaurants as a form of tourism.

Instead, this migrant eating habit comes to envelop many different cultural elements, or memories, according to where the person grew up. For example, Maryam Mameghanian-Prenzlow from Iran associated glub eating with polite manners, when she stated:

we don't have for instance autobiographies
many autobiographies because ...
it's not polite to speak, to tell
who I am, what I do
it's very communicative also because
you can't talk while eating the seeds

Here, the shift, without transition, from a rule of polite behavior to a function the seeds fulfill in a culture of restraint, is perhaps more telling than elaborate analyses of food laws, however insightful they may be. From this short but twofold statement, we not only learn something essential about Iranian literature, but we are also offered an explanation of glub that complements the earlier one. For here, there is no question of unemployment and poverty to explain the habit. Nor is there, again, any mention of religion. What matters most, perhaps, in this statement is the tight bond it establishes between cultural values, eating, and literature.