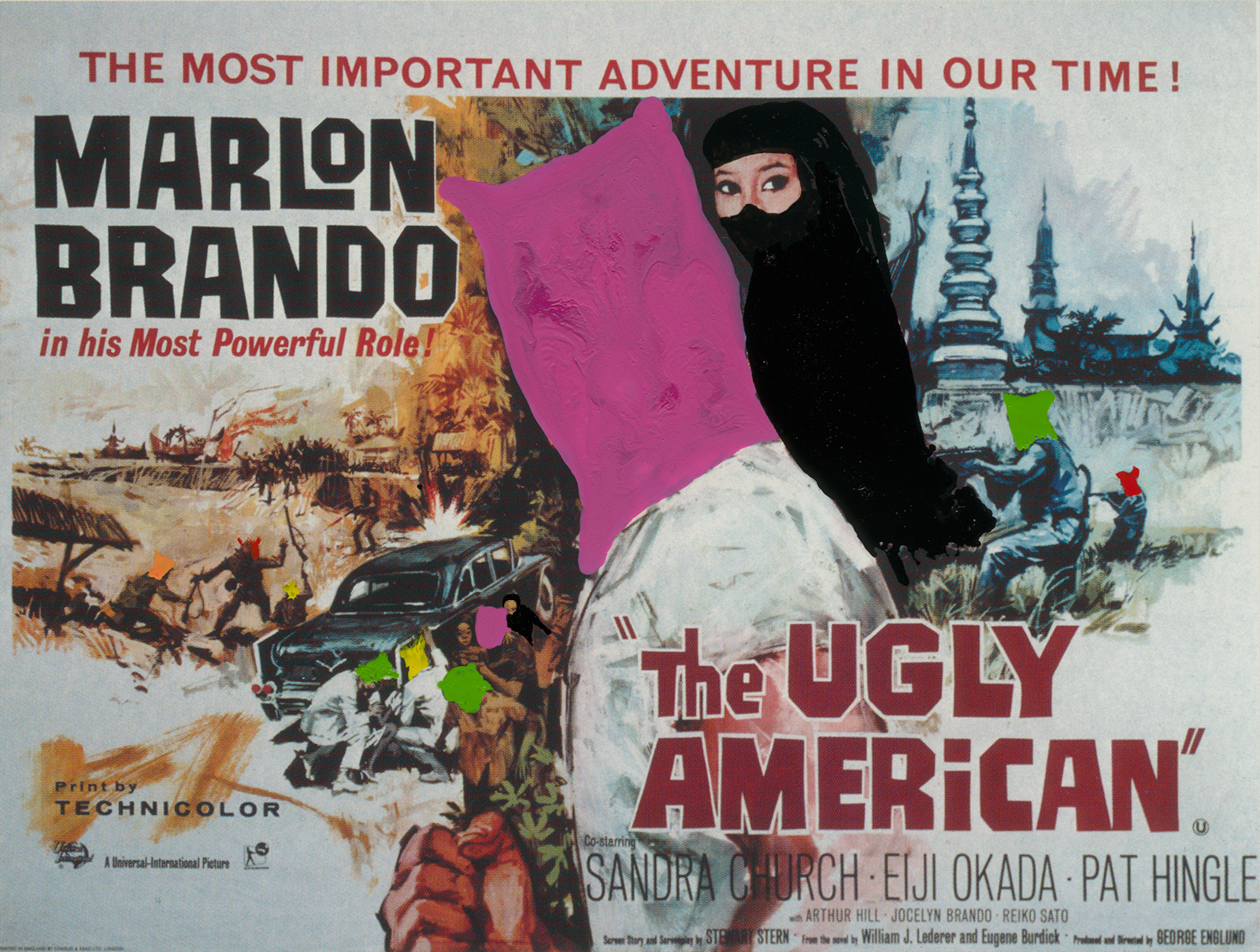 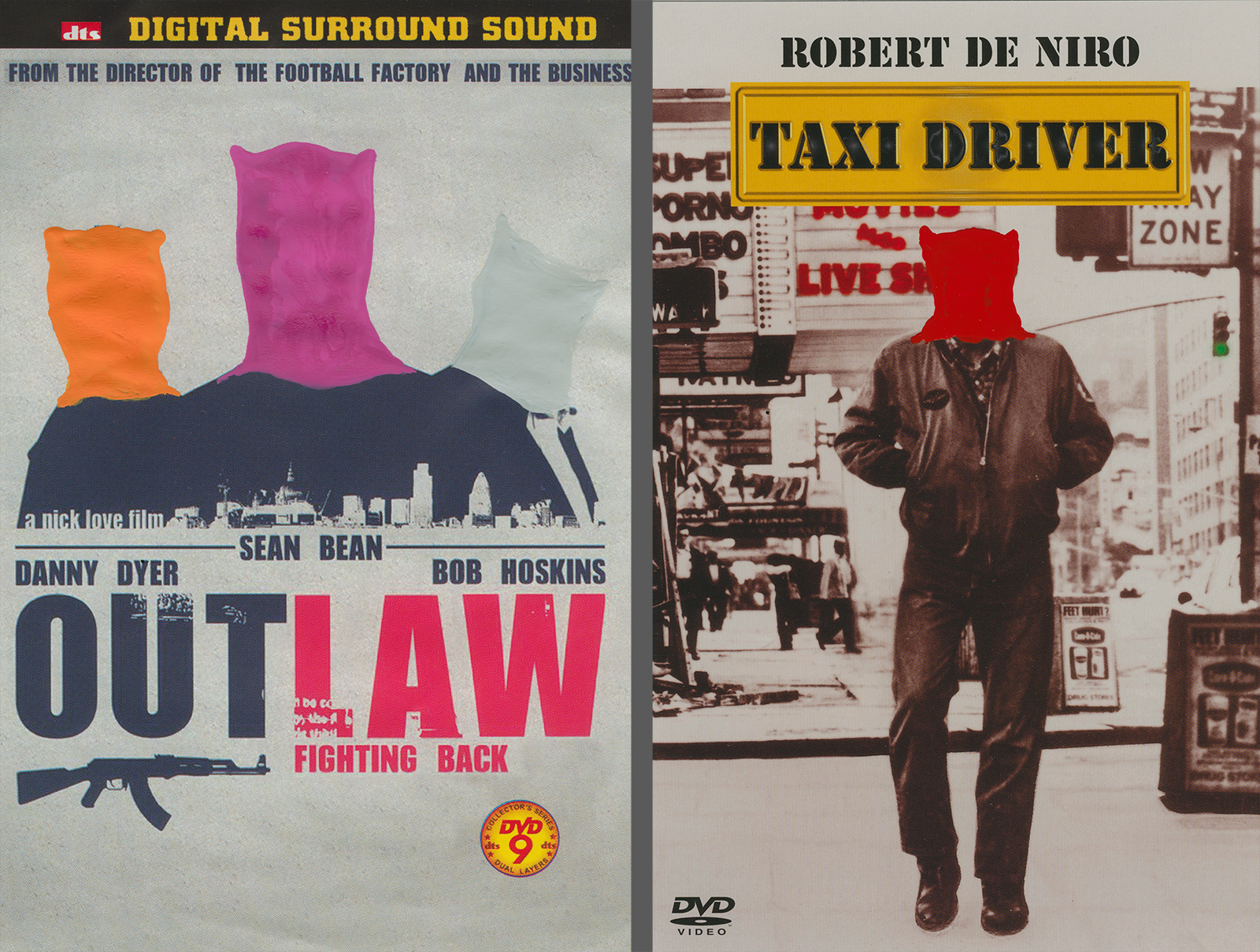 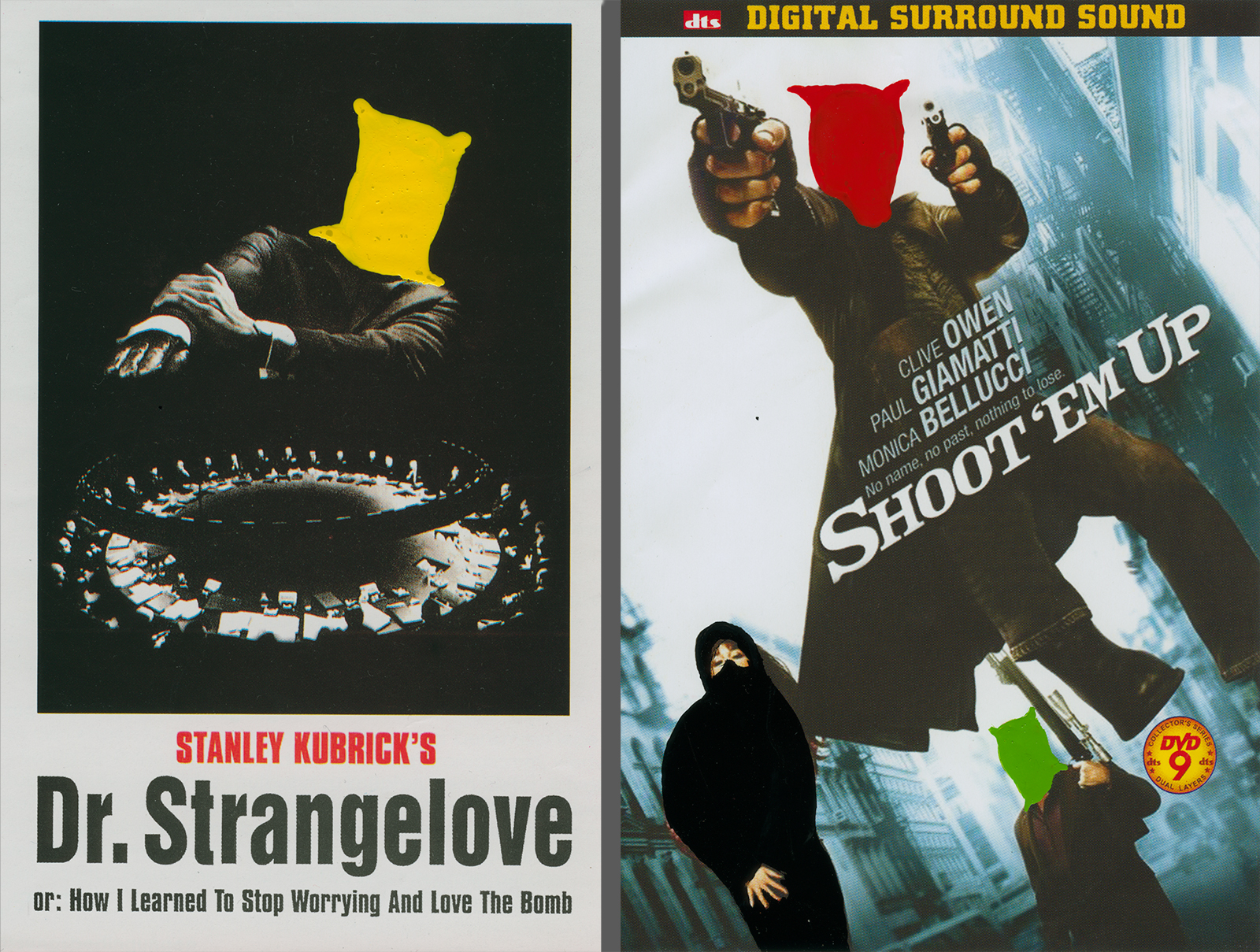 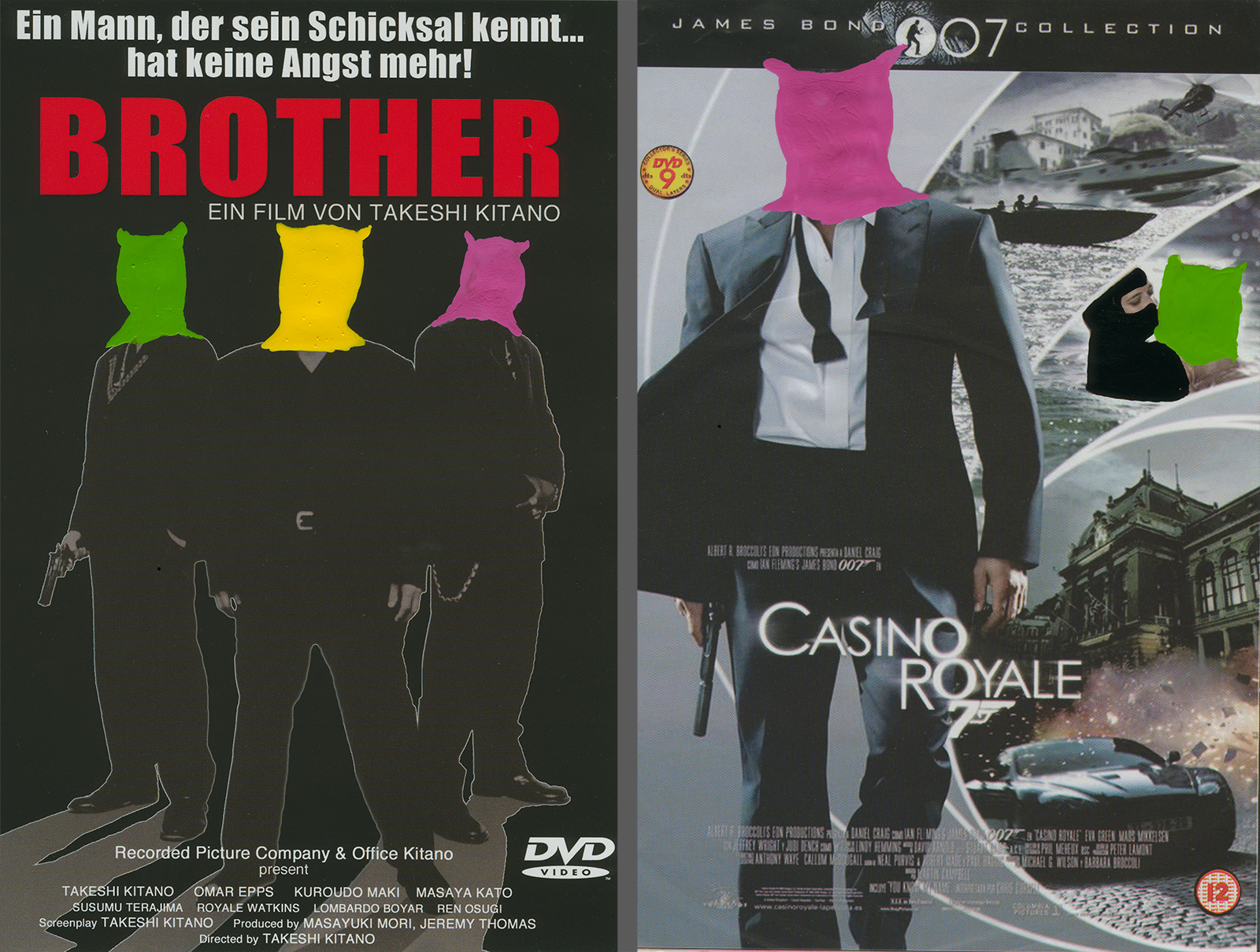 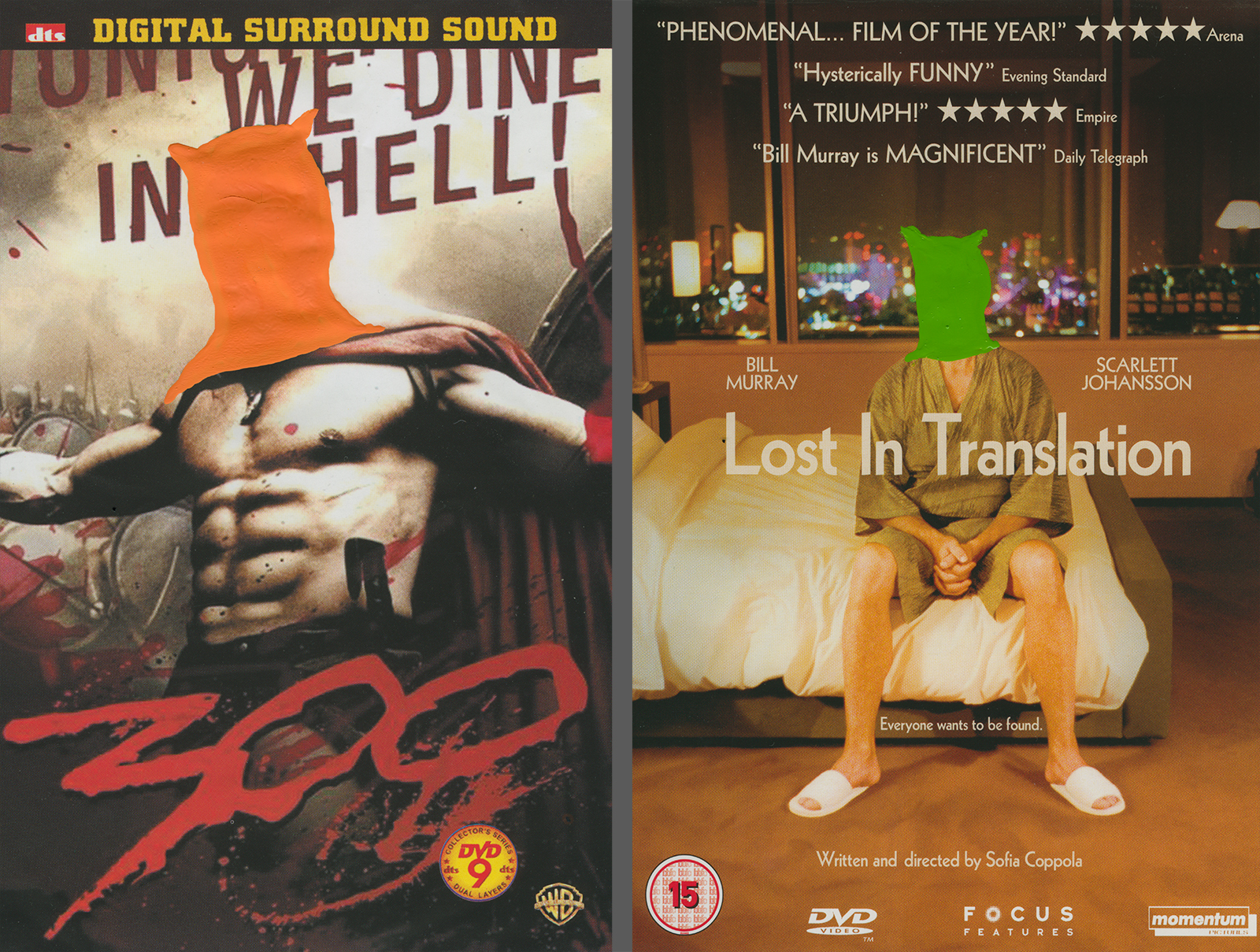 Tent and Sacks consists of a series of "Hollywood Movie Advertisement" that had been painted over with permanent maker. Entekhabi covered all bodies of the female figures with a chador (the word “chador” in Farsi means both, “tent” as well as “veil”) and all heads of the male figures with a sack that reminds us of the disputed US-American practice of isolating male political prisoners from their surroundings. Whereas in Islamic countries the female body is meant to be “protected” from the penetrating view of a male society with the help of the veil, the West mirrors this practice by inversion through seriously constricting the functions of the most important sense organs in order to make any contact with the outer world impossible.

My works in general deals often with question of seeing and being seen, with visions of my ownself and visions of others. Within the works . Islamic Vogue, Das kleine Schwarze, Miniatures, , Him and Her, Tents and Sacks, Playboy and Islamic Carding.
After the Islamic revolution, the requirement for religious Shiite women to wear the black chador turned into the only possible public manifestation of women in Iran.
At the same time, a censorship of female imagery in books and magazines in the public libraries and universities within the Country had also begun. As such pictures of uncovered female heads and parts of the body were either cut out from the printed matter or covered with paint in order to transfer them into the only valid aesthetics.
After September 11, the chador became the metaphor for radical Islamism, and, in addition, the symbol for the question of releasing women in "MENA Region Countries" from male oppression. In the series Islamic Vogue, Das kleine Schwarze and Playboy that I began in 2001, I started - in an ironic and humourous fashion the act of mimicing censorship within my home Country to "Islamize" the Western fashion world through veiling all the female bodies and faces shown in the German edition of the magazine "Vogue", on "H and M" fashion posters and on a set of "Playboy" play cards and postcards. Two cultures collide in my work: On the one hand, the series remind us of the fact that many women are exposed to these obligations. Inevitably, at the same time, we think of the "Black Widows" that we know from the news. On the other hand, the pictures also scrutinize the often doubtful ideals of beauty within the Western world
Shahram Entekhabi

∗ Him and Her is part of the permanent collection in the Edition 5 Erstfeld, Erstfeld, Switzerland