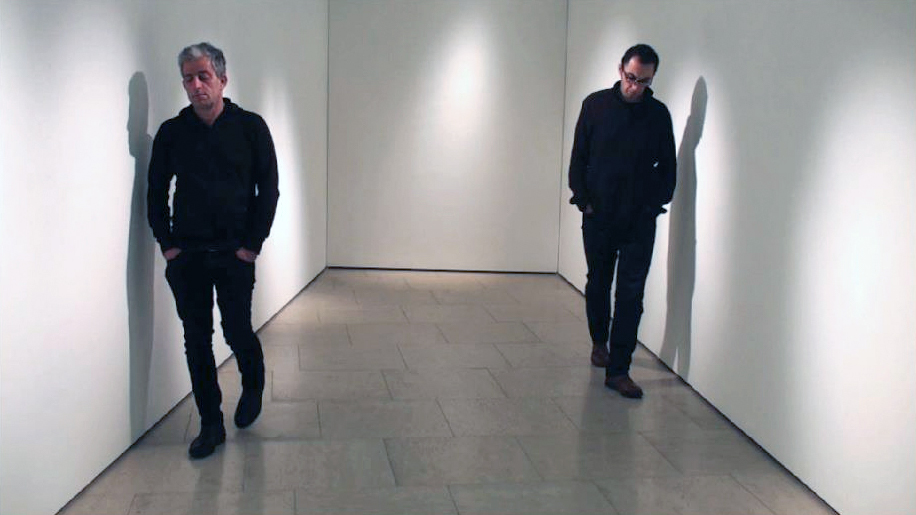 In Entekhabi and Samadzadegan’s video artwork Limbo (2012), the message becomes clearer. The two artists start from the same position in a small gallery space. They pace the room back and forth but eventually fall out of rhythm with each other, pacing the room at different intervals, partially because they are oblivious to each other. Yet the joke remains the same: they are in a cramped space together—are they really invisible to each other, or it is just another case of actively ignoring what the other is doing? What separates the two artists from each other is nothing but air, yet the boundary between them is fraught with psychological tension that bars one from entering the space of the other. In this monotonous pacing, nothing is really accomplished but isolation, ignorance, and misunderstanding. Yet, since only air separates them in this self-imposed limbo, there is still much fluidity and movement between the two—the barrier between them is only a malleable limitation, not an inviolable border.
Staci Gem Scheiwiller
Miyan-e Mahdoudiat-ha ya Marz-ha? , Contested Agency in Contemporary Iranian Art
Excerpt from the catalogueof the exhibition: The State In Between in Contemporary Iranian Art, SALZAMT, Linz, Austria


Behrang Samadzadegan was born in Tehran, Iran, in 1979. He received a BFA from the Tehran University of Arts, and an MFA from TTU (Tehran Tarbiat Modares University).

"Limbo" appeared at the following exhibitions 2012: The State In Between in Contemporary Iranian Art, curated by Julia Allerstorfer, Atelierhaus SALZAMT, Linz, Austria (catalogue)