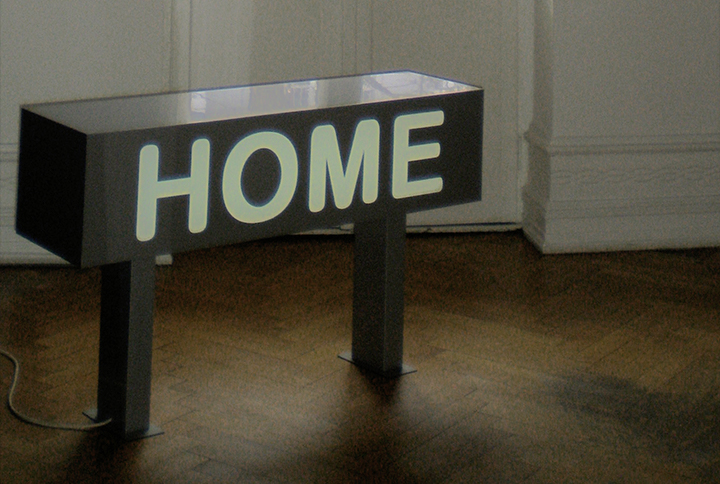 HOME
Light box, 180 x 75 x 40 cm.,2006
The light-box object Home is a quotation from the film set of Stanley Kubrick´s master piece A Clockwork Orange. In the movie, the sign that is standing in front of the house of a writer appears two times: Once, before the protagonist Alex, a violent juvenile, and his gang entered the house of the writer to rape and murder his wife. A second time, after Alex submitted to a controversial experiment in prison to make criminals ill at the mildest suggestion of violence or conflict: After the experiment, Alex was attacked by the members of his former gang and could not defend himself as a result of the experiment. Heavily injured and desperate, he re-enters the house of the writer to ask for help without recognising it.
Entekhabi transfers the sign into the context of migration, of home as a hostile or friendly place.
"HOME" appeared at the following exhibitions 2009: Shahre Farang — Gallery KunstBüroBerlin, Berlin, Germany
2008: From the Banks of a River called HOME — Centre d’art Nei Liicht, Dudelange, Luxembourg (solo exhibition)
2006: It’s been a long way, baby — Bunkier Sztuki, Krakow, Poland (solo exhibition)