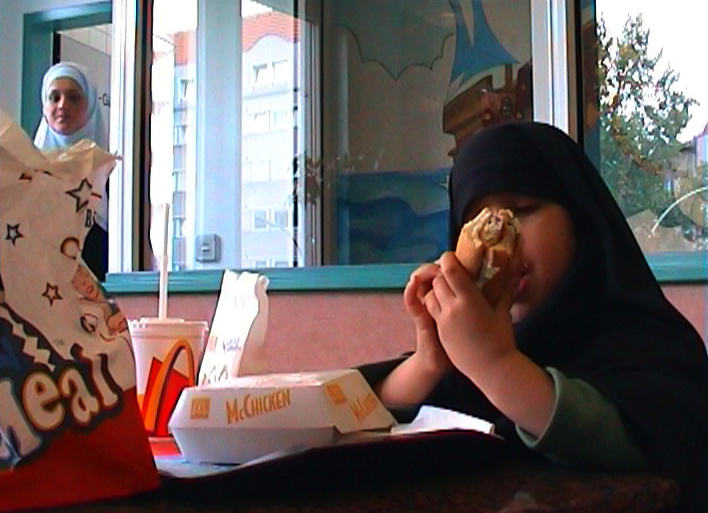 Parable of the Garden

Shahram Entekhabi’s purpose in creating Happy Meal transcends a mere acknowledgement of the globalization phenomenon. He is particularly interested in the question of identity. In fact, much of his work seeks to explore how Muslims living in the West strike a balance between Islamic tradition and Western influence in this rapidly globalizing world, in which they have equal exposure to both. With this in mind, Entekhabi hones his analysis of migrant identities to consider the notion of visibility versus invisibility, and whether the culture that these immigrants bring with them from home is truly “seen” by others in their newly assimilated environments. Happy Meal seems to be an anomaly within the context of Shahram Entekhabi’s usual work. Here, not only does he deviate from his usual schema of using characters who are either migrant workers or fundamentalists, but his message also seems to be far more optimistic and playful. This video depicts the intersection of two seeming antipodes of today’s society: Islam and Western corporate capitalism. Happy Meal chronicles a little Muslim girl as she excitedly eats a McChicken.

Happy Meal in a German McDonald’s. At times, it seems very apparent that the chador which she is wearing gets in her way as she tries to finish her sandwich and then remove the Happy Meal toy from its plastic covering. This continual interference is a metaphor of the often contentious relationship between Islam and the Western world. The background music throughout the piece is a cycle of two catchy children’s songs praising Allah that also serves to highlight the juxtaposition of Islam against the West. Watching the progression of the work unfold, one witnesses a moment in which these two antipodes converge, and all differences are evinced. It is a moment when all the external factors – the politics, the prejudices, the stereotypes – that accompany life as a Muslim living abroad cease to be. After much grimacing and machination, the girl is finally able to overcome the “burden” of her chador and remove the plastic covering of her Happy Meal toy. At this moment the girl seems truly and completely happy. Aimee Marcereau DeGalan describes this point in time as when “the possibility and excitement of new cultures being created.” Indeed, the creation of a hybrid “third culture” is the main message that Entekhabi is seeking to convey through Happy Meal. The third culture is one that embraces ideas from both the East and the West, and that threads them together instead of forcing them apart.

) and Deborah Hutton
The College Art Gallery, The College of New Jersey, USA

The video "Happy Meal" is part of the permanent collection in the video forum of the Video Forum of the Neuer Berliner Kunstverein (n.b.k.)

"Happy Meal" appeared at the following exhibitions and festivals, among others: