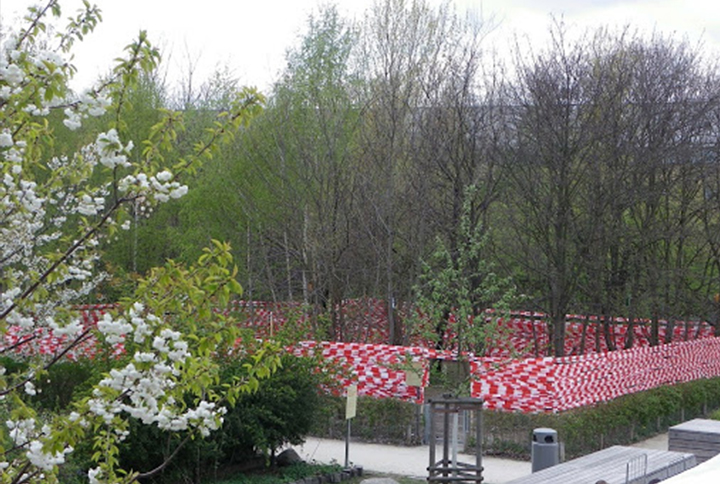 Bird cage
Installation for bird calls, field recordings, caution tape
Shahram Entekhabi (Parasite Architecture) and Amy Green (Sound Installation)
birdcage.2Bird Cage is a meditation on transition, urban nature, urban encroachment, and the relevance of soil for biodiversity and nature conservation.
Bird Cage is an auditory abstraction of an ecological succession in time and space. It is based on the results of the study of the urban-rural gradient of bird species in Berlin (Simon et al. 2006)
Urban land development has pushed many of our long term avian companions like the grey partridge, an animal which featured prominently in the stories of the brothers Grimm , out of the city center. As we go into our city centers, the number of species declines. At the same time, at the outskirts of the city, in nature or what is left of it, intensive agriculture has led to the mechanization and simplification of the landscape. Birds are being pushed out of agricultural areas as well turning urban parks into pockets of high biodiversity.
In 2015, the International Year of Soils, one in eight species of birds in Germany are at risk of extinction. One quarter of the bird species could be extinct by 2100.
Parasite Architecture surrounds Nature
The structure of the installation is informal, temporary, weak, imperfect, unfinished, and formless. Informal things can change faster and provide more room for change. Expressions of the transience of the informal are migration and cultural diversity.
One vulnerable patch of nature in public space – surrounded by a wall of caution tape – evokes concepts of safety zones and no-go areas. It addresses the notions of exclusivity and inclusivity. The musical composition is made up of bird calls and devices used by humans in cities. The piece begins with an aria of endemic species of the Berlin area which are no longer found in the area. The music of song birds, woodpeckers, car alarms, mobile telephones, nightingales, subway trains, and doves fill the bird cage.